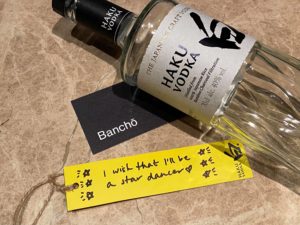 THE WINNER OF OUR HAKU VODKA & THE ULTIMO STAYCATION PACKAGE WAS ANNOUNCED ON THURSDAY 5 NOVEMBER! CHECK OUT OUR INSTAGRAM HIGHLIGHTS

Thanks to everyone who participated – we hope your wishes all come true!

In partnership with House of Suntory’s Haku Vodka, enjoy our ‘Tanabata’ Star Festival cocktails all October and go into the running to win a staycation package at The Ultimo boutique hotel, complete with an astrology reading and drinks by us!

Purchase any of the Haku Vodka Star Festival cocktails between 1-31 October and receive a tanzaku to write your wish on. Include your contact details and tie it on the bamboo at Banchō all month and in November we’ll draw a winner for The Ultimo staycation prize package – see details and Ts&Cs further below.

It’s been a tough year so we’re looking to the stars and being hopeful and wishful for the rest of the year – with a Haku Vodka cocktail in hand! To cap off the month-long event finishing, we’ll have The Ultimo’s resident astrologer Pia Lehmann (Dip.Counselling Astrologer) in on Saturday 31 October from 5-8pm for a limited number of complimentary astrology readings for guests who purchase a Haku Vodka cocktail. See our Facebook page for more info. 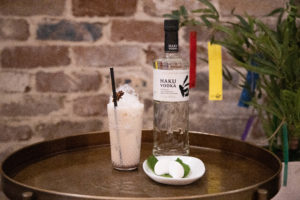 HIKOBOSHI, 20
Haku Vodka, Amaro Montenegro, red bean, cream, honey, black walnut bitters
Hikoboshi, the Cow Herder, and Orihime fell in love and married. She stopped weaving and his cows strayed all over, so they were separated by Tentei across the river and forbidden to meet.
Suggested snack pairing: Matcha mochi ice cream, red bean paste, $6

The winner in our Haku Vodka ‘Star Festival’ cocktail competition will win the following prize package, valued at $915:

Entries for The Ultimo & Banchō’s staycation prize package open from 4pm Thursday 1 October and close at 12:00am Sunday 1 October 2020. One tanzaku paper entry per Haku Vodka cocktail purchased – you can enter the competition as many times as you like during the competition period. Valid entries must include email contact details on the tanzaku paper.
The winner will be drawn during the week of 1 November 2020 – the winner will be contacted via the provided contact details. If the prize is not claimed within 5 days of notification, the prize will be re-drawn until the prize is claimed.
This promotion is held by Banchō Group Pty Ltd. For any further information, please contact info@banchobar.com.au